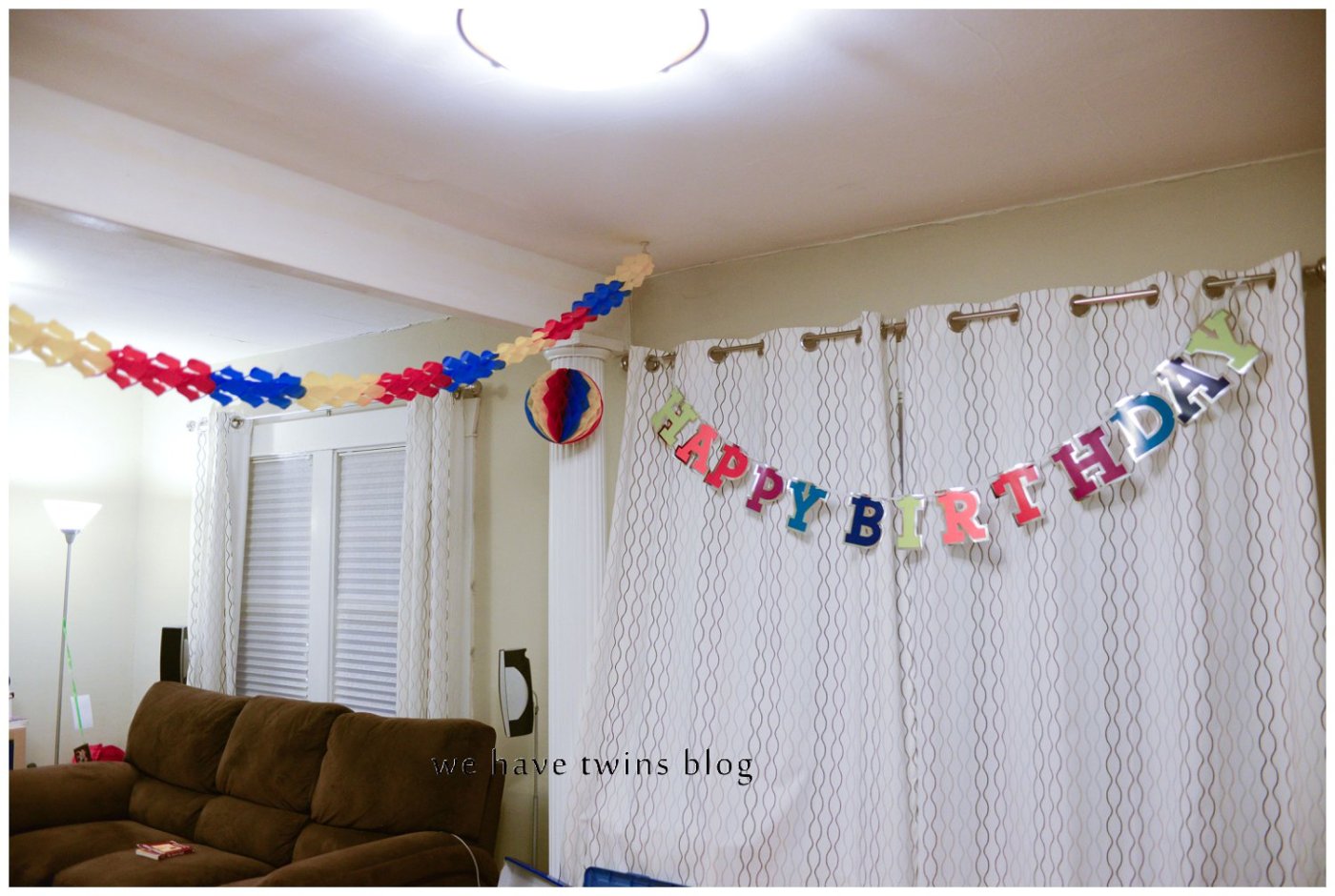 At first we weren’t going to do anything for the twins’ first birthday.

See, we still don’t know that many people here, and their birthday falls near Thanksgiving, when a lot of people leave town, plus I didn’t want to plan a “thing” or even have an official “to-do.” Plus of course, the babies don’t know anything, a party wouldn’t mean anything to them.

But after going to a friend’s baby’s first birthday party (which was nicely put-together and well-attended), we thought about it and decided that we should mark the occasion with some kind of event.

So we decided on  the Sunday after their birthday, and invited all of our friends with babies. We found some decorations at Party City, and I looked up a few recipes to try for snacks, and I made a plan for cake. Just a casual get-together, really.

For decorations, I kept things really simple. No pinterest here–nothing chevron, no striped straws, no drinks in mason jars, no hand-lettered signs labeling the cheese and crackers. That is not my style, at least not for this kind of thing. (If that is your style, awesome!)

There was a banner, because a) it was a great backdrop and b) we can use it in the future:

I made this fun streamer ‘curtain’! It was supposed to also serve as a fun photo backdrop, but I never got around to that.

I printed out all of the babies’ monthly and holiday photos from this past year, and strung them up on a ribbon. (Here it is at the end of the night, on the floor.) It was neat to see them all together like that! I always like looking back and seeing how much they still look like themselves, only smaller and slightly less-fully-formed. 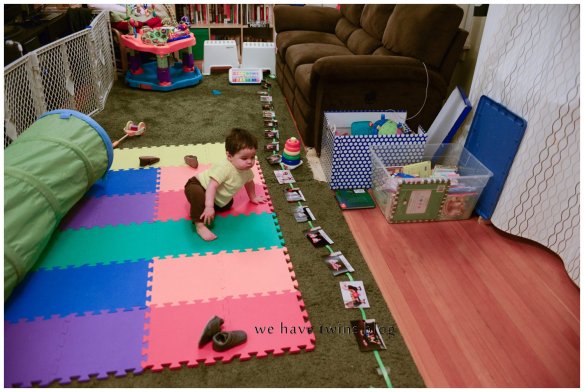 Somewhere on a facebook page, I read about a recipe for Carrot Apple Cheddar Bites as a tasty toddler snack. They stunk horribly of egg while cooking, but got good reviews by all who tried them!

I decided not to deal with making a cake from scratch and got some box mixes and frosting. I made a batch of chocolate cupcakes and two chocolate cakes in loaf pans (one for each baby, of course), because I found this adorable first birthday cake idea from Betty Crocker:

So cute and so perfect, right? Here’s what mine ended up as: 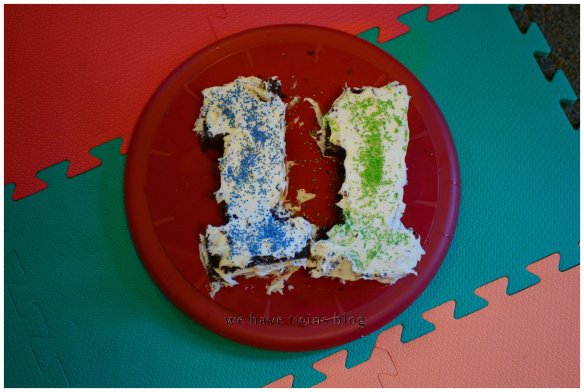 I made the cakes that morning, and they were so light and fluffy! Cutting out the shape with the paper template actually worked pretty well. But I learned a good lesson: pay attention to the part that says refrigerate cake before frosting it! Should have made it the night before. Also, get extra frosting.

We only had a few people, and two other babies. Everyone played for awhile and then it was time for the celebrating! 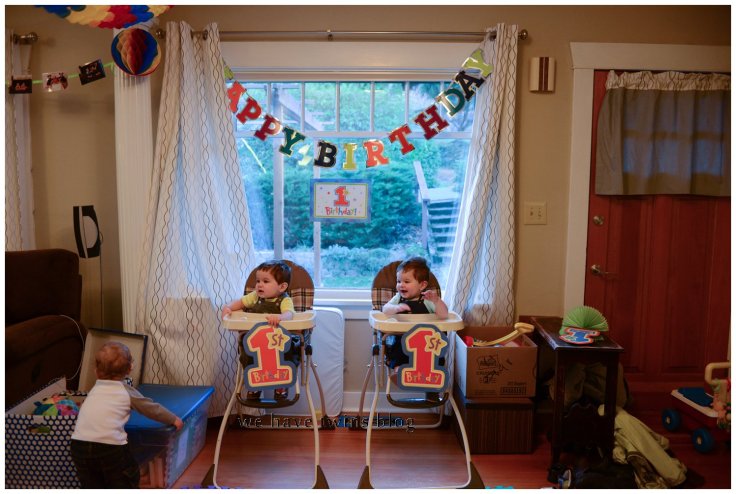 We put the cakes on their high chair trays and sang happy birthday to each of them. They were not sure what to think about any of it! They poked and stared at the cakes. M did figure out that he could eat it, but E didn’t–I gave him a piece. Neither really wanted much, and neither really wanted to dig in their hands. Oh well. More cake for mama. 🙂 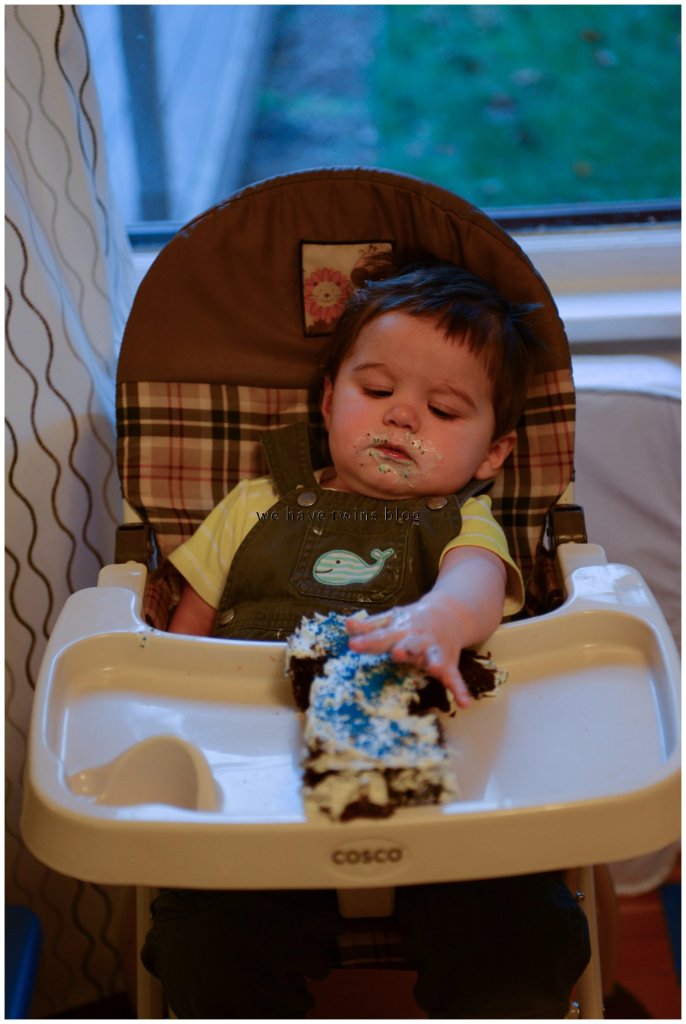 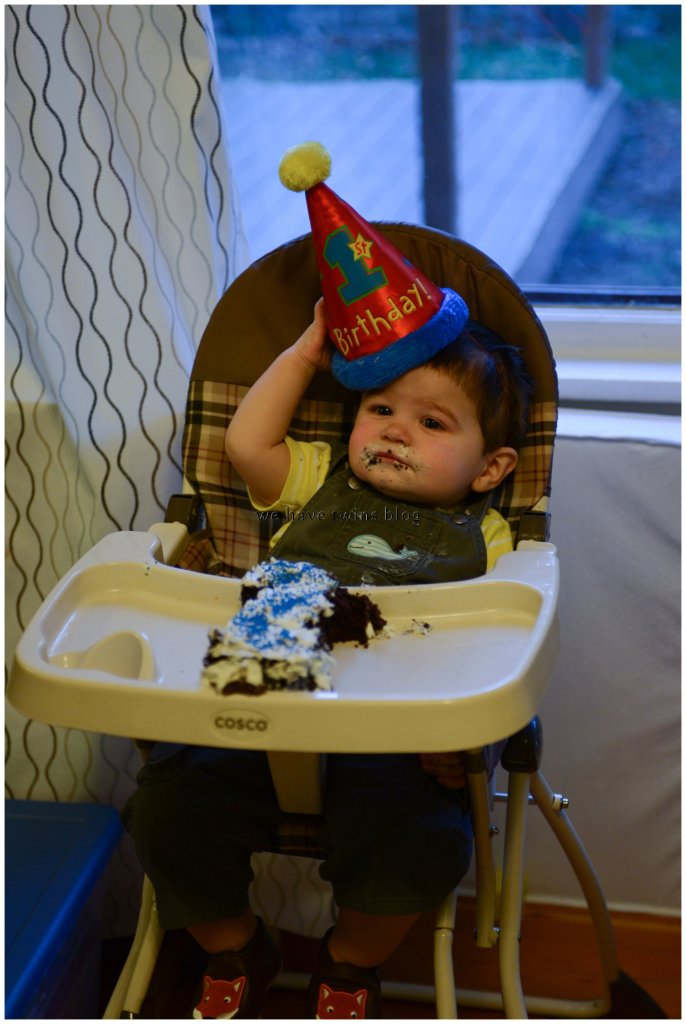 I ended up being really glad that we did the little ‘party.’ First, because I wanted pictures of it, but also, it was nice to make it an event: to purposely think about and celebrate a whole year of these wonderful babies, and us as a family of four. Even better that we got to share with a couple other people – I hope that we continue to build a community here in Portland in the coming years. I can’t wait for these guys to be old enough to actually play with our other baby friends!

I’m a photographer and educator. The twins are now 9 years old!