When I went to the big twins club re-sale last spring, I had a very specific list of items that I knew the babies would need in the short term. When I saw the huge area of big toys, I froze. I tried to think about the next 5-6 months and what the babies would do or learn or want or play with. And I had utterly no idea what, say, a 9 month old could use.

So I figure that as I go along, I’ll keep track of the toys we use in age-ranges of our babies, in hope that someday, another parent will find it useful! This isn’t an official review or sponsored post, it’s just what our babies have liked and used a lot.

Also, FYI: Baby Cheapskate does an annual roundup of “Toys that get played with” for all age ranges, based on reader polls/surveys. Here’s the 2013 list for 6-12 months. You should follow them on Facebook--they find and post tons of deals on baby gear every day!

I’m calling this 6-12 months because it’s a nice round number, but honestly, the babies are still playing with almost all of these toys at 14 months!  Also, they aren’t walking yet, so they’re not taking advantage of those kind of toys yet.

Also note that I got almost all of these things from craigslist or consignment sales. Baby stuff can get expensive, and secondhand gear is often just as good for the wee ones, but way better for your wallet!

Activity Table (ie, crack table) Man, did they love this! We called it the crack table because it was like a magnet–if we turned it on in an adjacent room, the babies would come crawling! And they would just keep playing with it, so when it was time to wind down at the end of the day, we’d have to move it to the kitchen to ‘hide’ it. I could see them practicing their gross and fine motor skills with all of the different ‘activities’, and I really think this helped them develop their standing stamina, too. Thankfully, the intensity of their love for this toy finally dimmed a bit. It’s still in our kitchen, and they still play with it a bit here and there. The Sit-to-Stand Learning Walker would be a good alternative to this–I’m not sure if both would be necessary.

Riding toys: like our horsey that I found at a resale for eight bucks (newer version on Amazon) or a wagon. We have a vintage Fisher Price wagon (from a different resale), which I love for its simplicity.  Here’s their ‘new’ version, with lots more crap on it. These seem like they will continue to be played with for quite awhile.

Musical toys: The babies seemed to love the music aspect of the kick n play piano mat, but I hated that there were only four keys and that you couldn’t just play a note. Any time you hit a key, it made a note but then also a jingle. I wanted some kind of musical toy/piano that is JUST MUSIC. Well, those pretty much don’t exist anymore. Everything sings and talks, plus does the ABCs, or talks in Spanish, or counts numbers. I just wanted them to push a key and hear a single note! Happily, I found one of these piano/xylophones and a teeny cheap little keyboard at the local Value Village for around ten bucks altogether. Some bleach and some qtips, and they were good to go! They don’t play with these a ton, but I like that they have the opportunity to “play” “music” with their own little hands, and I hope that they will keep playing with musical toys as they get older and more coordinated. 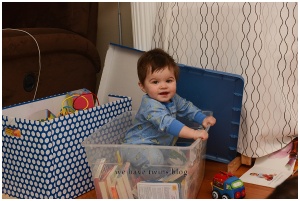 Bins of things: (books, toys, linens). I like the 56-quart clear bins from Home Depot or Target. We keep the baby books in one of these bins, and it turned out to be a perfect size for climbing into and on top of. 🙂

Exersaucer/Jumper: (to sit in or to stand on the outside of). We had one of each before they were six months, since there were two babies that needed activities to rotate through. One was borrowed and one was from craigslist–we could not have afforded both otherwise! The babies LOVED the jumper for a long time but kind of got over being in the exersaucer sooner. However, it’s on my list because we still have it in our living room–they still like going over to it and playing with a few of the toys, especially the one where you push a button for some music. They start bouncing their little legs and smile. 🙂

Rattles We like to put popcorn kernels in empty containers and let them shake shake shake. 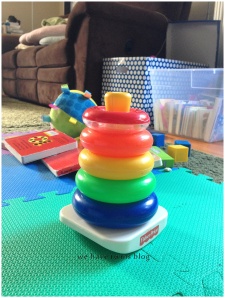 Stacking rings (plastic or wooden) and stacking cups from IKEA (see above re: banging things together): I always heard these were good toys for babies but they seemed so boring! I have been proven wrong–the cups in particular were an instant winner for our babies. They’ve gone through different stages of playing with them: first to eat, then to bang together, then nesting together, and attempting to stack them. I’m telling you, three bucks, endless fun and entertainment.

Shape Sorter Bucket: The pieces can be used for chewing and banging together first, and then the babies will learn about dumping out and putting in again. Good times! It’s also an excellent hide and seek ‘mask’, according to E.

Sharky brush: Teether/toothbrush that the babies love to chew on!

Foam playmat: We keep this on our living room rug to cushion falls and tumbles, and to prevent messes from getting to the carpet. It does trip them up sometimes when they’re pushing the riding toys. 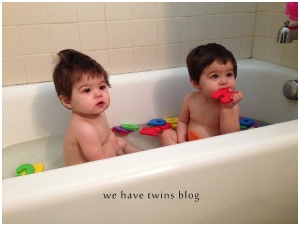 Bath letters:  Who doesn’t want fun bath toys to chew on and throw over the side?

Touch and feel books, lift-the-flap books. They love lifting the flaps so much that they rip them right off!

I’d love to hear your additions to this list–what do your 6-12 month olds love to play with?

4 thoughts on “Our Favorite Toys for Babies, 6-12 month edition”