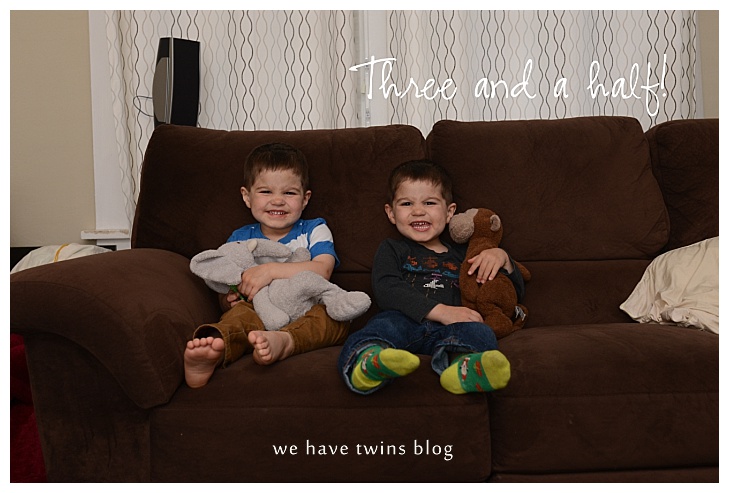 The boys are 3 1/2! And man, we are definitely living with three-year-olds. (Though M says, “I’m thirty-five,” because that’s how much he weighs.) There are a lot of tantrums–most of them are about food, and most of them are when the boys are tired and/or hungry. Sometimes they’re both having a tantrum at the same time. Fun! 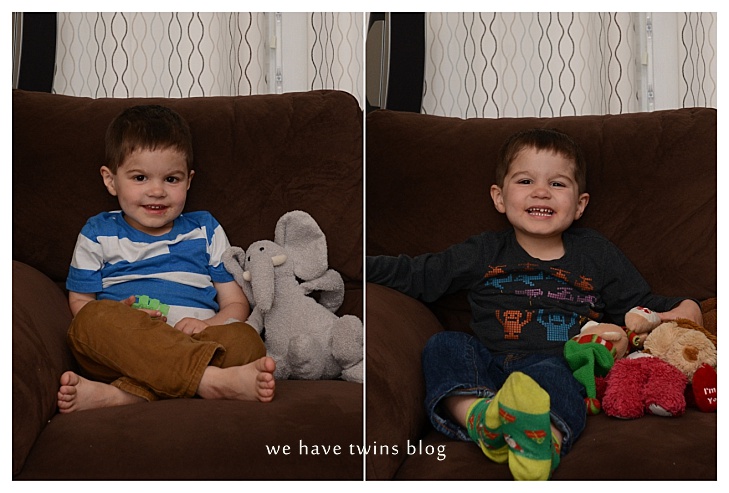 Some very common phrases in our house right now include, a whining “I don’t have that much!” which can refer to anything from a pile of magnatiles or a bowl of blueberries. And “You won’t be my best friend anymore!” which is so hilariously threenager that I can’t even take it. E’s also in a phase of responding to any question with “no” and a cheeky grin. Like, “You guys went to the park today?” “No.” “Did you have fun at the play cafe?” “No.” Silly goose. Oh, and if one of them is mad at us, they yell, “Don’t Talk To Me!” Drama galore!

Potty training is going great. They’re both in undies all day with no problem (they FINALLY are doing well with potty at daycare) and are in pullups overnight. We’re dreading the ordeal of night training, so we’re still procrastinating on that.

We made progress on another big-kid update: On Easter Sunday, we randomly changed the cribs to toddler ‘beds.’ It was a rough transition. The first night was actually full of screaming. (Our fault for not preparing them and doing this so randomly.) In the first week, there was some accidental rolling out of bed, there was some purposeful getting out of bed, there were screams, and giggles, and taking forever to get to sleep. Oy, it was so frustrating! However, now that it’s been a couple months, the misbehavior has subsided. There was a fun few days when they were running out of their room giggling after we’d put them to bed. After we shooed them back, we could hear them plotting: M: “Let’s wait till they go away, then we’ll out of bed!” E: “Okay!” (ARGH, twins!) Thankfully, it was only a few nights.

Relatedly, the boys are no longer napping at home. (They are still napping at daycare, though.) This shouldn’t be a surprise, with the bed change and their age, but it is not a welcome update. We really needed that daytime break on weekends–for work, for our own naps, for trips to the gym or grocery store. And, you know, for sanity and some freaking silence.

There is good news though: we’ve started doing a 30-40 minute car nap, which makes the evenings much less cranky. Plus they go to bed a little earlier, and sleep more soundly, and sleep in a bit later.  Fewer bedtime shenanigans too. And of course not having to be home for several early afternoon hours really opens up our schedule for events and outings! I really like not having to live according to a nap schedule.

Mornings have changed a bit too. Once they could get up easily by themselves, they’d just start playing magnatiles together, or reading. But often they’d start arguing, and pitter patter into our room, saying, “He won’t share!” or “I don’t have that much!” For the last couple months now, the routine is that they get out of bed and come in to our room, crawling up on our bed to snuggle. It’s pretty stinking adorable to open my eyes to E’s or M’s sweet face with a big huge grin. Plus it means we can be lazy and stay in bed longer.

I’ve been taking the boys to the local library branch every couple weeks. They love picking up piles of random books and piling onto my lap to read them, and then checking them out. And of course they like returning them into the book drop! I’ve been taking snapshots of the haul each time to keep a record. It’s funny how they’ve gotten really attached to some of the books. And some of the books are really odd, like one they loved was Pat-a-Cake Baby…which I swear was written on some kind of drug trip.

We have a growing (alternately very hip and very unhip) playlist of mostly ‘grown-up’ music that the boys are into right now. Which is great, because it’s all from our own music libraries, so I like the songs. (As opposed to, say, There Was an Old Lady Who Swallowed a Spider, or god forbid, There’s a Hole in My Bucket. WORST SONG EVER.) However, when I inevitably find myself singing along to Chandelier or Blank Space, the boys say, No singing, Mama!

After their mind was blown by Under Pressure (this was a few months ago now), they made “microphones” out of chalk holders and they like to “sing” into them. E is always “Fred Mercury” and M is “David Bowie” or just “David.” Nowadays they sing whatever–sometimes gibberish, sometimes one of these songs (this past week it’s been Shake It Off), sometimes a Red Yarn song (he’s a local kid’s musician). Oh, and now they get to play with the real-looking Rock Band microphone too, which they think is amazing. They plug it in to the heating vent in the living room and carry it around the room to sing.

For a few months, they forgot about their magnatiles, but they are firmly obsessed again. (Which means lots of issues about who has more/not enough.) And they’re really into puzzles right now. We have a few sets (thanks Grandparents!), and they’re able to do them all by themselves now. It’s really cute to hear them parroting things we’ve said about helping them match pieces.

I want to be sure to acknowledge that the annoying stuff is not the whole picture. Yes, the typical 3-year-old behavior sometimes makes me want to scream with frustration and impatience (like getting ready for bedtime, UGH the worst)…but there are a lot of wonderful things about this age too.

We’ve been doing some baking together occasionally. On Valentine’s Day we all made pink chocolate chip cookies. They did such a great job at pouring and stirring and scooping…and eating the batter. 🙂 They ADORE ‘smoolies’ [smoothies] and helping me make them–putting things in the blender, pushing the button. The other day we made apple carrot muffins, and they poured all the ingredients in for me and helped stir.

It surprises me how much they can do. I keep thinking they’re so little and not yet ready for fine-motor manual tasks…but they’re quite agile and capable. We need to remember to allow them to push and explore their physical boundaries.

They still love helping and want to help with everything. (This was true a year ago too–but now they can actually do stuff!). About half the time, of course, that helping comes in the form of a tantrum, like the time I got a spoon out of the drawer to make the oatmeal, and then E started hopping and whiny crying, “I wanted to do it!” Being psychic would be helpful for living with three-year-olds. 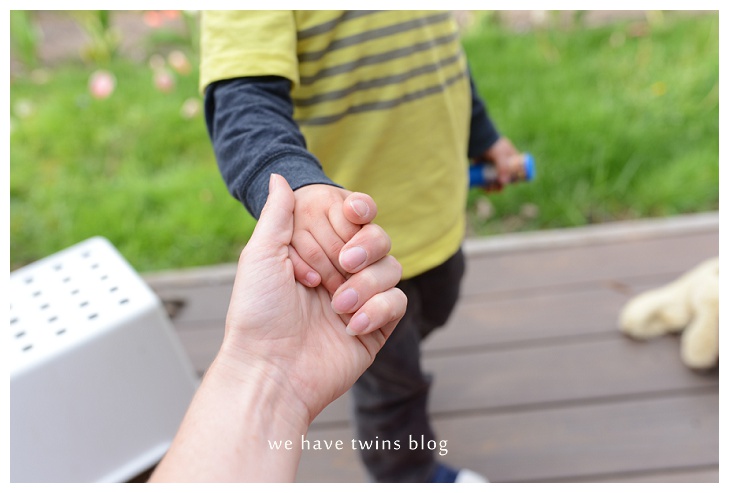 Other cute mis-pronounciations include decker-bocker bus (double-decker bus), hot tog (hot dog), wallermelon (watermelon), and Burger Bill (Burgerville). Oh, and the other day I was talking to them about what they can be when they grow up. E wants to be a cooker (a cook) and M wants to be a fireman.

We started a sticker chart this spring! Originally it was to help with naptime and bedtime, to convince them to stay in their beds. That basically didn’t happen at all. Oh well. We also gave stickers for things like going potty on their own, bussing their table, brushing their teeth on their own. When they filled a whole row of stickers, they got a reward–an extra episode of tv, or time to play iPad games. It’s pretty much the cutest thing watching them get a sticker and put it on their chart. Sadly, the novelty has since worn off…which I don’t mind too much, actually. If they don’t really care about the stickers but they’re still somewhat motivated or working on those items, then that’s still a win.

The best part of three-year-olds is that there is lots of laughter and silliness. They still play together all the time, and it’s happy and peaceful at least 85% of the time. (They do fight over toys or how much each of them have.) (And sometimes the silliness isn’t appropriate, like when it’s bedtime.) But they LOVE playing chase with us, just running in circles in the house or in the garage. They love being tickled, and pretending that I’m a monster trying to get them, or any other random silly game I make up. They like directing things too: “I’m the teacher, you’re the kid.” “Say, ‘I’m going to get you!'” “You chase me!” 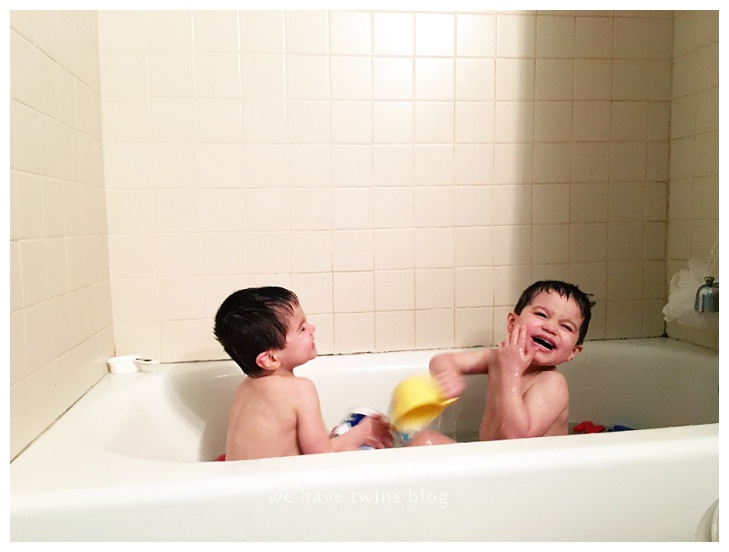 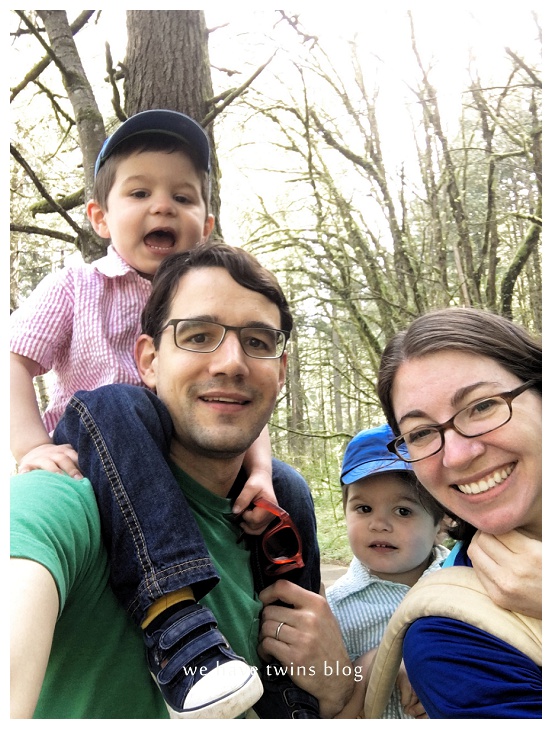 And there is so much love and affection. I already mentioned the morning cuddles. When I pick them up from daycare, they literally run over to me ready to tackle me with hugs. It is the best. AND when someone comes back from being gone or away, they will say, “I missed you!” with big happy grins and hugs. Again, the best. They also are still fairly polite, and ask each other to do things, or one will go get/give something to his brother as a favor. They still like to hold hands with us, and they still want to be carried or get a shoulder ride (which is easier than carrying with arms…but hauling a 35-pound preschooler is rough on the shoulders). They still want plenty of hugs and snuggles at bedtime. They’re really so very sweet.

So yeah, overall, this is a really neat age. They understand so much, they can really communicate, they can do lots of things by themselves, and they get excited about so many things. Like seeing an airplane or a MAX train, or eating fresh berries in their morning oatmeal, or coloring pictures for family members. We’re really enjoying these sweet boys right now! ❤ ❤