We took the boys to get donuts on a Sunday morning. But we waited too long and forgot to give them a snack and it got too close to lunchtime, which of course is a recipe for disaster. So they wanted to eat the donuts at the shop, but there wasn’t a place to sit and eat. We said we’ll eat them when we get home, and they whined and whined and whined and then M said, mama should leave the family forever. And of course so we kept getting irritated and finally we said, OK well you can’t have your donuts right now because you’re being too whiny.  We did eventually let them have one bite to try it, and then after dinner when it was dessert time, neither of them wanted the freaking doughnut!

But…they’ll also say I don’t like you and E especially will yell NO KISSES sometimes.

We have four year olds! 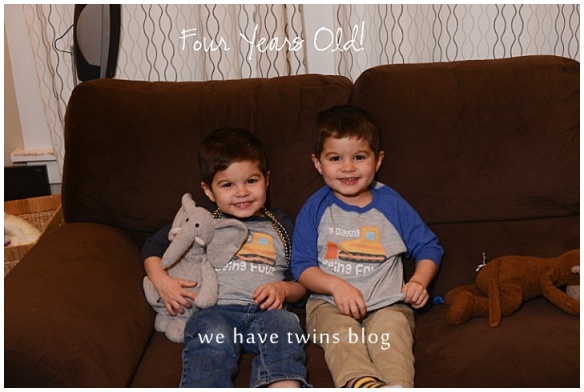 Big, giant, articulate four year olds. Who give spontaneous hugs and kisses, who fall to the floor yelling about not enough cheerios in their snacky cup, who scale couches and counters, who can entertain themselves and each other, who sometimes share nicely and who sometimes fight like dogs over jammies or toys, who can recite entire books, and so much more.

No more naps, not even car naps. We found that bedtime was easier without them, and though they definitely get noticeably cranky sometimes in the afternoon, it’s usually fairly smooth to just make it through. 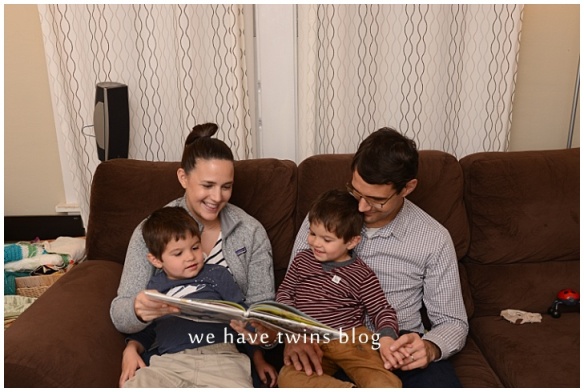 This summer we did nighttime potty training, which involved us waking them up overnight to go potty while they were still half asleep. We started this process in June, I think, and we gradually changed the times, and in October we stopped waking them up, and they made it through the night! There have been just a few accidents since. Overall a massive improvement in all our lives to have that taken care of! 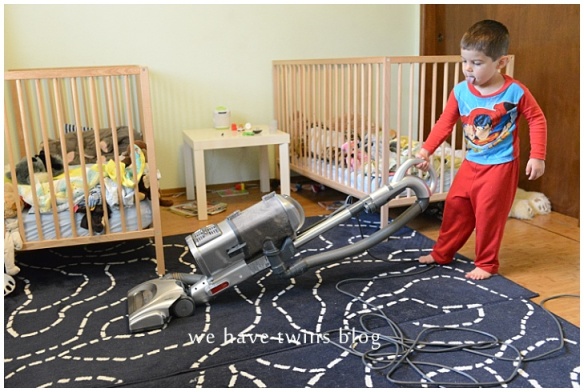 Also, the whining. So much whining. Can you hear the whining that was happening in this picture? I’m probably a terrible person for taking a photo, but this child whined nonstop for at least twenty minutes the first day we went up to Salmon Days (a local festival near Seattle). There is also near-daily whining about food, either because someone wants food or wants more food or wants different food. I think one of the theme phrases for right now is “I’m hungry still” in a whine. 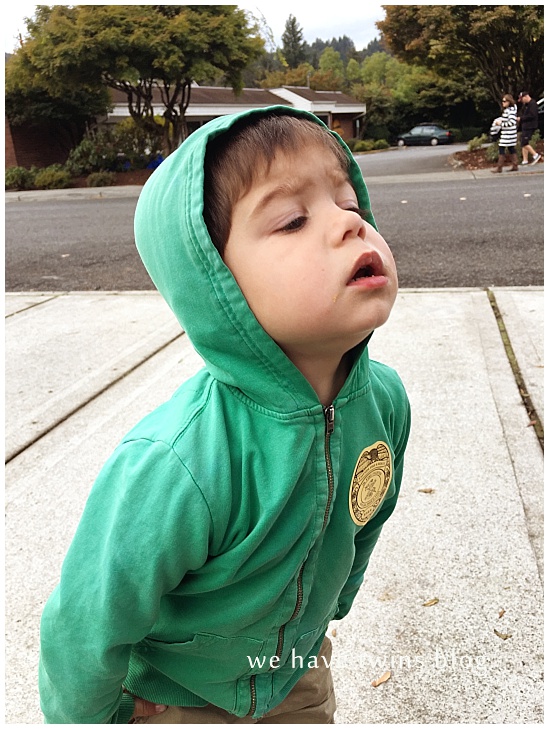 Related to the whining, they get mad at us for things like making them eat their dinner, or telling them not to stand on their chair, or other unreasonable things. They constantly say things like, “You’re being mean! That’s rude! You can’t come to my birthday party!”

However, they also run up and give me spontaneous hugs and kisses. They love playing chase games and tickling games. They say, “You’re my best friend!” M tells me that he’ll always be my baby even when he’s a grownup, because that’s what I tell him, which is too adorable. They are really sweet and wonderful boys like 85% of the time. It’s just that that 15% is SO very annoying. 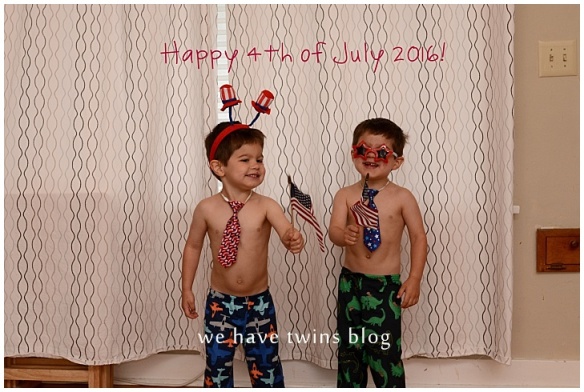 Since the last post, we had some good summer adventures, like a million fruit-picking days (fresh raspberries are the best!!!), and two trips to the coast. Our annual 4th of July trip to the Hood River Valley to pick cherries and visit Mt Hood was a success. The boys were a little confused with the snow. 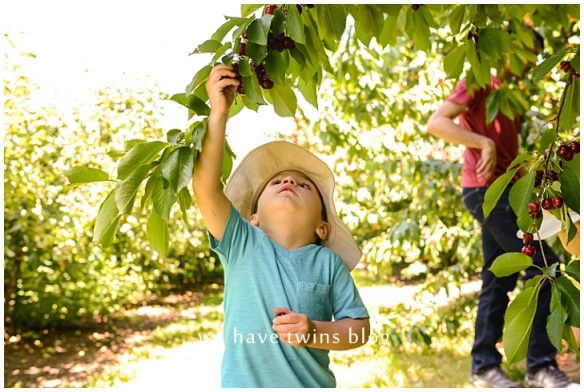 We all went bowling together! They wanted to roll their bowling balls just like us, and they actually did really well. E won the first game! With the bumpers, obviously.

We got in a few trips to Oaks Park too, and they were tall enough for just about all the kiddie rides. The Froghopper was a favorite for all of us.

Birthday party time!! This year they asked to have their party at JJ Jump.We had a few friends come, and everyone had a good time bouncing and jumping all over the place. 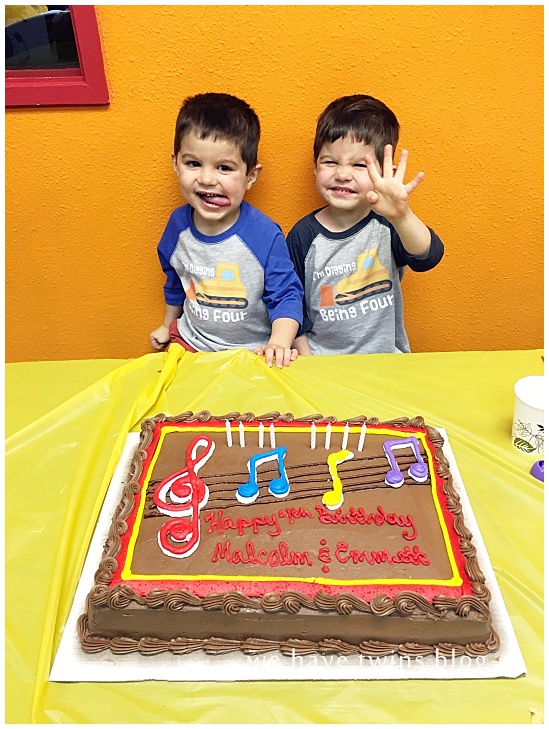 Thanksgiving headbands required some serious persuading this year. We had our now traditional dinner at the Edgefield buffet, and like always, the boys mainly ate bread and fruit and dessert. M did have some turkey, and I helped E have a couple bites too.

So much energy these two have!! I’m glad we got that trampoline last Christmas; it’s a great way to bounce out some energy on the dark evenings after daycare. 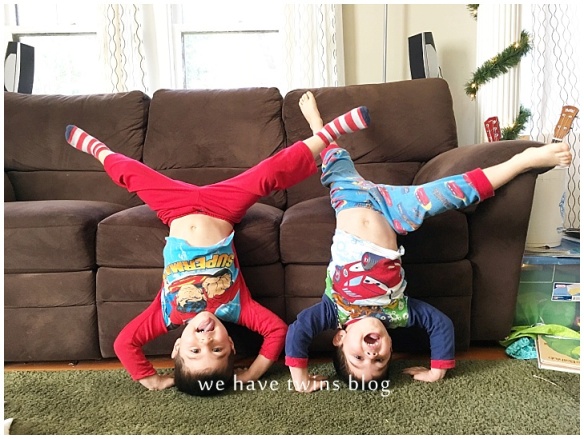 I had them help me make Christmas cookies in December. It was super adorable how excited they were to help cut out the shapes, and then decorate them. 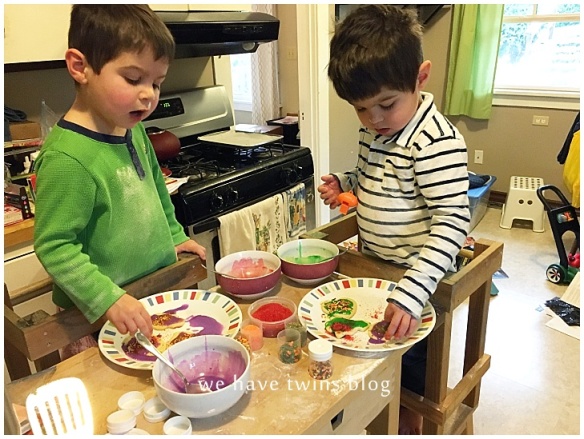 This fall we *finally* moved up bedtime to 730, and that’s made a huge difference. (We’d  been getting them up to their room between 815/830, and it was always a giant headache, and it would take them for-e-ver to fall asleep.) Now we are usually done with the bedtime stuff around 8/815. So nice to have more quiet evening time! The boys often stay up a little longer reading in their beds with little LED lights, which is really sweet. 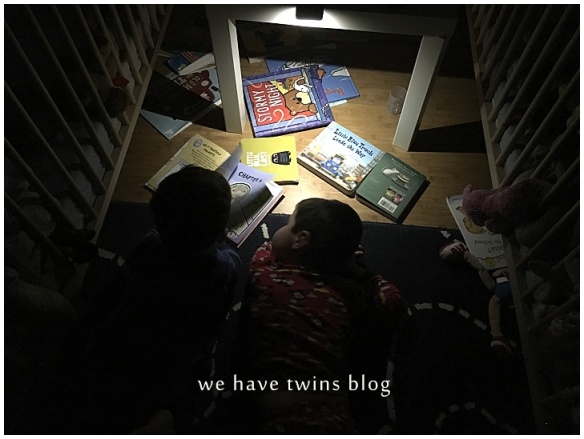 We paint sometimes, and sometimes they get paint not on the paper. 🙂

They love drawing and coloring. They still mainly do scribbles and coloring in patches, not really trying to draw people or objects. They can sort of color within lines. Just recently they started drawing shapes, like all kinds of circles or triangles. Sometimes they include letters, but usually not on their own. M wrote his whole name last month, sort of! 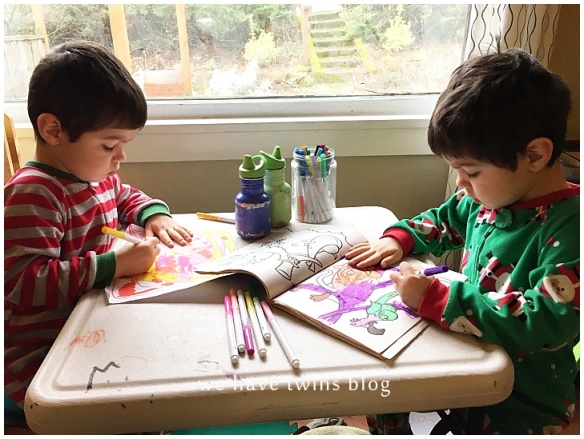 They love cutting “tickets” with their scissors. Just very recently M got a little obsessed with paper snowflakes, so I’ve helped him make at least a dozen or more. There are tiny pieces of paper littering their table area more days than not.

Both boys still come into our bed for snuggles in the morning. The catch is that M now comes in overnight too, and burrows into A and falls asleep. Half the time A doesn’t even realize it, but wakes up and finds M there, and then takes M back to his bed. Then M comes back between 6 and 7am, and goes back to sleep. E comes in around 7, and gets mad because he wants to be next to Daddy. M doesn’t want to move even though he’s been there for an hour or more. So there’s an argument, nearly every day. (And it’s always an argument about who gets to be next to Daddy because no one cares about snuggling with Mama.)

M is totally and completely in love with potty talk. Poo and pee are now some of his favorite vocabulary words. One memorable example was his version of Jingle Bells where he replaced ALL the words with either ‘poo’ or ‘pee.’ Oh, four-year-olds.

This fall we signed them up for a gymnastics class at the community center. I was worried that they’d just stare the whole time, since that’s what they did in their dance class a couple years ago, but they LOVED gymnastics! They fully participated, did a great job following directions, and really did well on the skills. (I got to visit one class; their nanny was with them for the others and had wonderful reports.)

Speaking of our nanny, she decided to pursue her other job full-time, so we switched to full-time daycare in November. It’s been a transition, for sure, but overall the boys have done pretty well. There’s been whining and crying when we drop them off, but they’re always playing happily when we pick them up. And for the first time, I started hearing them say, “I love school!” and “I want to stay here forever!” 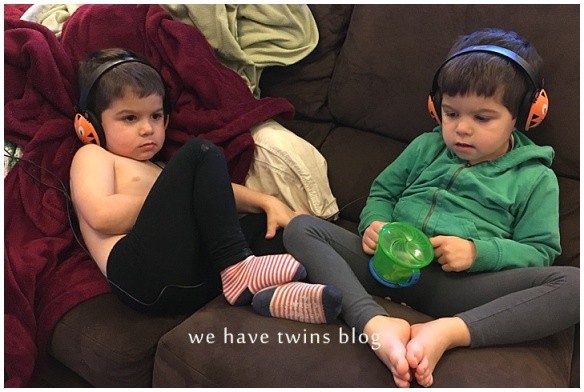 They’re into books, as always–especially Curious George (that’s them listening to the audio versions!) and Berenstain Bears. Daniel Tiger has waned a bit. For TV, they love Little Einsteins, and sometimes still Super Why and Curious George.

Seriously. Look at these sweet faces! We love them so much!